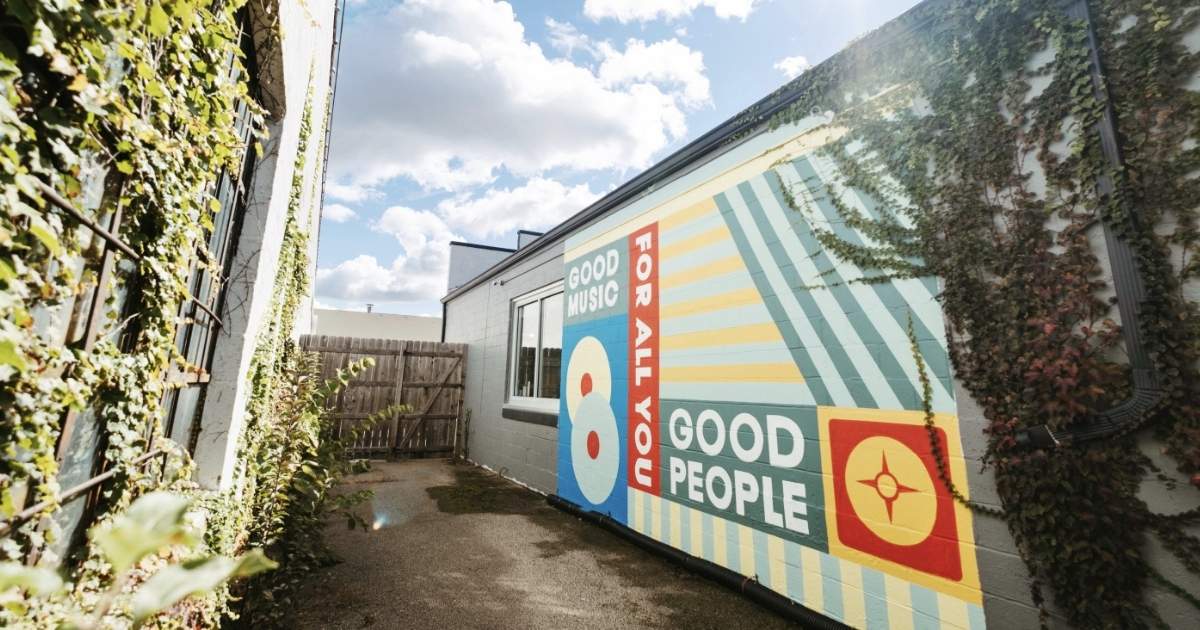 With indie greats like The Getup Kids, The Dodos, and Pedro the Lion on their roster, we didn’t miss a beat following up with one of our legendary customers, Polyvinyl Records.

Originally established out of Champaign, Illinois, Polyvinyl Records has managed and launched over 400 releases from over 100 artists in its 25-year history. And they’ve stayed true to their organic, “DIY” roots.

The literal “mom and pop shop” operation built its now burgeoning label after two high school sweethearts dropped out of college to start their own “zines” (independently written, produced, and distributed photocopied magazines).

“You know, they were basically kids who grew up in a Midwestern punk rock scene, going to concerts in people’s basements and VFW halls (Veterans of Foreign Wars), and they would make these little photocopied zines that would have interviews with artists of that era and they would give them out at concerts,” Rob says.

The zines quickly gained momentum. Matt Lunsford and Darcie Knight (who eventually married) ventured into producing their first compilation record, birthing Polyvinyl Records in 1996. They now have a staff of over 20 people across the United States.

Polyvinyl Records has raised and established hundreds of artists and musicians, essentially from the ground up. Despite its expansion, Polyvinyl maintains its renowned (and refreshing) business model.

In the words of their founder, Matt Lunsford, Polyvinyl’s 50/50 profit-sharing model creates a “true partnership between the label and the band,” instead of a disproportionate and “adversarial relationship based on one side trying to get more than the other.” Matt reiterates that “we were artist-friendly because we were, well, friends with our artists. A partnership model was the perfect fit.”

As Promotions Director for Polyvinyl Records for the last five years, Rob oversees the label’s campaigns and publicists for their individual artists. Influenced by his older sister and “immersed in the East Coast indie punk culture of the mid 90’s,” he began playing for bands at bars in his Philadelphia neighborhood as “an underage high school kid. I had to get a no-alcohol X stamped on my hand!” he divulges.

Rob’s affinity for music and people led him to intern as a production assistant for World Cafe on NPR. There, he regularly interacted with various artists and producers, eventually meeting the person who gave him his first job in music as a radio promoter. Five years later, he packed his bags and headed for the hills…Beverly Hills, were he worked again as a promoter for a major record label.

After a stint on the road for over a year with Concord Music Group, Rob wanted a more consistent home base. “You know, a lot of that (touring) is how movers and shakers get stuff done in the music business, but for me, my passion was really just about making friends while coming up with creative ideas.” Managing radio and creative campaigns for dozens of artists at Polyvinyl, Rob has always had a “deep affection for marketing ideas.” He is admittedly inspired by his mother, “a veteran in the advertising industry who worked as an art director and created commercials” for thirty years.

Emancipating the experimental and pioneering spirit of their music, Rob and his team weave unique and compelling promotional campaigns for their artists. Vinyl records, cassettes and telephone hotlines are no longer a thing of the past. Like film photography, physical vinyl records might seem like a rare relic in a digital world. But Polyvinyl Records uses physical products like artist merchandise, hotlines, and vinyl records to engage listeners experientially as much as musically.

“I just have this sort of deep reverence for the kind of tricks that radio promoters would do back in the day. Like when Radiohead put out ‘OK Computer’, people at Capitol Records thought it would be a great idea to put a cassette of the album into a Walkman and super glue it shut,” he says. They then “mailed them out to radio stations with headphones. So all you could listen to was this record. This was before Napster so it was a great way to excite people.”

“I don’t remember where I first saw it happen, but I was captivated with this idea of creating hotlines,” Rob recalls. “Growing up, bigger bands might have a hotline or a fan club where you could hear the latest news, kind of like ordering tickets over the phone with Ticketmaster.”

The Reinvention of the Hotline

Stimulating a sense of nostalgia, Polyvinyl has resurrected the “artist hotline.” “Ultimately, commerce and capitalism might be at the heart of everything. But for us, it’s also about the emotional aspect, and the tangibility aspect.” Peaking listeners’ curiosity, hotlines move “the listener experience away from the digital experience to create an impulse for consumers and music fans to honestly enjoy their artists in a non-conventional space,” Rob asserts.

“Even if it’s something done 20 or 30 years ago, giving an artist their own hotline, such as the hotline number or vanity numbers we purchased through NumberBarn, elicits an urgency to engage with the people that we may not be able to see in person.” So, “why not create a resurgence with another medium to engage these fans.” Polyvinyl uses the ambiguity of a hotline number to fashion semi-immersive experiences.

Polyvinyl has operated two hotlines through NumberBarn’s sister company, NumberGarage, with a third hotline coming soon. Successful artist Jeff Rosenstock, “who plays at sold out venues all around the country, on the Seth Meyers program, etc.” gets the credit as one of the original Polyvinyl hotline masterminds. “One of his ideas was to just create a hotline with basically non sequitur prompts, like ‘press one if you’re feeling fatigued’. It’s not like we’re necessarily building ‘Choose Your Own Adventure’ hotlines, but it’s kind of to just make someone pick up the phone and laugh.”

Rob and his team also appreciate the efficiency and value of setting up a hotline or vanity number. “You know, there’s always an affordable option for a vanity number. And then all we have to do is use our resources to create sound files. We upload them to your platform, and voila, within 15 minutes we have a hotline,” he says. Hotlines build these “experiences where you can just hit zero to go back to the main menu and just try out something else. We do it because it’s fun. We do it because it’s unusual and it helps generate word of mouth.”

The billboard displayed an image of a man, reminiscent of a “Rodney Dangerfield characterization” followed by allusive instructions to “Call the BORN HOT-line” with the (now deactivated) hotline number.  It’s a subtle, or not so subtle, parody…”like ‘I am a big beautiful rock star. My record label bought me this billboard,” Rob laughs. The hold music played songs from his coming album, interrupted by hold messages saying “Please follow his music on Spotify, etc.”

Though artists like Rosenstock and Farren contribute their own campaign concepts, both the artists and Rob’s marketing team capitalize on cooperation and cultivation. “It’s not one individual or singular idea. We collaborate with each other as much as we collaborate with our artists.”

And for Rob, “I still get chills when I hear one of our artists’ songs on the radio.”

“From my position as a promotions director, nothing makes me happier than watching people connect with the music that we’re helping to release, amplify, uplift, and put out to the world,” Rob expresses.

Rob and Polyvinyl champion their artists, even when they move on to larger record labels, etc. When an artist “plays on Sirius XM for example, that’s a national platform. All those little moments that are wins for our artists, are wins for us,” Rob affirms. “If one of our artists gets written about in Rolling Stone or the New Yorker, that’s a major accomplishment.”

“Good music for good people.” At the end of the day, it’s this “Polyvinyl ethos” that drives Rob and the Polyvinyl team. “I’m fortunate enough to say that I work with a lot of really good people, and we all care about each other and nurture each other’s ideas; people who demonstrate true reciprocity and respect, kindness and creativity,” Rob concludes.

Wow, we’re inspired. At NumberBarn and NumberGarage, we thrive on meaningful connections. We believe that “behind every good phone number is a great idea, opportunity, or person.” Thanks Rob and Polyvinyl for the thoughtful way you connect with those around you, from artists to listeners, staff, and companies like ours.

Expand your outreach and accessibility with a hotline. Why not make it a bit entertaining and unforgettable? Get a customized vanity number and easily configure it with an automated hotline menu today!

*Curious to hear more from Polyvinyl?  “To commemorate the last two decades of Polyvinyl’s evolution from a bedroom operation to one of the most respected indie-rock labels in the United States, we’ve selected 10 of the company’s most innovative releases.” ~ The Observer

How "Slide Into Vegas" Slid Into Our Hearts